As a committed transit bicyclist and an occasional advocate for pedestrians in Atlanta, I was eager to attend last week's Sustainable Transportation Forum hosted by Georgia Tech and the local Consulate General of Switzerland, a 2-day public policy symposium which promised "to explore solutions to Georgia's growing traffic congestion." 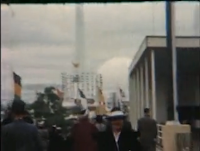 I enjoy going to these kind of symposiums, and I imagine the excitement that I feel about them is in some way like the excitement my father felt at the prospect of making the trip from Atlanta to visit the City of Tomorrow at the 1939 New York World's Fair.

After attending the better part of the first day of the forum, I could confidently report that I had seen the future, and it was the Swiss national transportation network.

But like the Futurama of the 1939 Fair and similar exhibits at later world expositions, this is an elusive future, always beckoning, but forever out of reach; a tantalizing future city, draped in a facade of technological hopes but unanchored in any foundation of social and political reality, at least as far as transportation in metro Atlanta is concerned.

Representatives of Swiss rail and transportation agencies had been enlisted to introduce the "gathering of regional planners, advocates, policy makers, business leaders, and political decision-makers" to the remarkable Swiss transportation system and to highlight some of its most significant engineering and logistical achievements as the central parts of the program.

First and foremost among the featured projects was the Gotthard Base Tunnel, currently under construction and expected to open in 2018 at an estimated total cost of $8.7 billion.  When completed, at 35.5 miles in length, it will be the longest tunnel - of any type - in the world and will not only cut passenger travel time between Zürich and Milan by an hour, but also significantly reduce the amount of through-traveling truck traffic on Swiss roads.

No less impressive than how well the Swiss have built their transportation network is how well they operate it.  By manipulating the times trains arrive and depart and the speeds they travel between stops, Swiss Federal Rail is able to insure that trains leave regularly every half hour and are synchronized with not only other trains, but also buses, at some 28,000 stations around the country.  An integrated national timetable stitches together all publicly- and privately-owned transport services; everything from high-speed trains to sight-seeing ships is included in this schedule.  The level of planning required to coordinate the operation of this system, which functions as precisely as, shall we say, a fine Swiss watch, is phenomenal.

Ironically though, the most significant words spoken with regard to the reality of the future of public transportation in the Atlanta region were not those of the Swiss representatives in their technical presentations, but of Michael Meyer, Professor of Civil Engineering at Georgia Tech, a member of the introductory panel, and the person who had been asked to characterize the transportation problems to be addressed by the symposium - that is, the current and projected levels of traffic congestion in the Atlanta region - in order set the stage for the discussions to follow.

Having completed his assigned task with a few minutes to spare, Dr. Meyer struggled - out loud - with a difficult personal decision:  should he wrap up and keep his commentary within his limited charter or should he take the opportunity to say important things that needed to be said, even at the risk of offending his hosts and souring the optimistic mood established by the opening speakers.  Erring on the side of integrity, Meyer chose to speak his potentially discordant truths.  It was like watching the story of a minor "profile in courage" in the making. 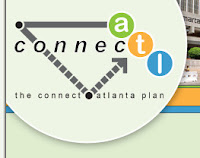 Professor Meyer began by noting that he had lived in Atlanta for more than 20 years and that, during that time, he has seen many fine transportation plans come and go.  Indeed, he said that he had contributed to a number of them, and that, truth be told, had any of those plans been fully adopted, we would not be in the transit mess that we find ourselves in today.  Finally, he concluded that the sad fact of the matter was that we had failed at providing citizens of this region with a quality transit network not because of any lack of good planning or shortage of technological know-how, but because we have lacked the leadership and the political will to get the job done.

What Meyer had to say with these cautionary words was an unexpected, but an oddly appropriate, kickoff for a transportation forum that could otherwise well be described as a dog-and-pony show for Swiss good planning and technological know-how.

Interestingly enough, the better lesson that the Swiss had to offer Atlanta and, by extension, the United States, was how central the principle of mobility as a basic human right is to the success to their national transportation enterprise.  Each of the speakers touched on this point, but one in particular, Michaela Stoeckli, the general manager of the Swiss Rail Industry Association, spent some time with the issue.  She explained that, because it was long agreed among the Swiss that residents, regardless of their level of income should have access to the kind of transportation services that support them in their practical and leisure activities, transportation initiatives, even expensive ones, were routinely approved in popular referendums by overwhelming majorities.

Now, admittedly, convincing Georgians that mobility is a basic human right - given that they and other Americans are hardly persuaded that access to life-saving medical care is a basic human right - is a hard sell.  To add to this challenge, it is especially difficult for "outsiders" to participate in our national debates without being perceived as either patronizing or condescending. 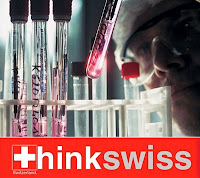 But, as Professor Meyer observed, all the proposed engineering solutions for our transportation problems are for naught, absent the political will to follow through with them, and, it would seem, that progress here must start with a reorientation of our values.

In this respect, it is interesting to note that this particular forum was part of an ongoing program to promote exchanges of know-how between the U.S. and Switzerland called ThinkSwiss.  Perhaps that is exactly what we need to learn how to do - "think Swiss"  - and by that I mean recognize the benefits in store for us if we promote the right of mobility for everyone - so that we can once and for all realize the promise of the City of Tomorrow for transportation in the Atlanta area.

Sustainable Transportation Forum: Swiss Hit, Swiss Miss by Marc Merlin is licensed under a Creative Commons Attribution-Noncommercial-No Derivative Works 3.0 United States License.
Based on a work at thoughtsarise.blogspot.com.
Posted by Marc Merlin at 10:20 AM

This has been my experience time and again in the planning arena. Our real limitations have less to do with our planning and engineering capabilities than our small-minded and fragmented politics.