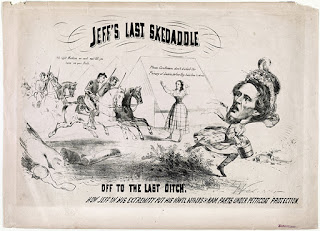 It would serve as a visible reminder that, while these three men were heroes of the Confederacy, they were not victorious ones.
Posted by Marc Merlin at 10:35 AM No comments:

The movie "Self/less" or "Oblivion Can Wait"

This essay on the movie Self/less contains spoilers.

As the movie Self/less opens, we meet Damian Hale (Ben Kingsley), a master of the business universe, if there ever was one. Damian takes no time in demonstrating that he is not about to be fooled or out maneuvered. Losing is not an option for him.

But we soon learn that it looks like this never-say-die competitor, may have finally met his match. Death is knocking on Damian’s door, and it isn’t inclined to take “no” for an answer. Might there be a way for Damian to use his smarts and enormous wealth to win again this time around?

It turns out that, thanks to an entrepreneur-inventor named Albright (Matthew Goode), “life’s a bitch and then you die,” is a restriction that now applies only to the undeserving 99.99%. Albright has developed a technology that allows extraordinarily rich guys like Damian to “shed” their old, faltering bodies and have their consciousnesses transferred into young, robust ones.

After a bit of reflection and a ham-handed attempt to make amends with his estranged daughter, Damian decides to pay his money and take his chances. When Albright’s spinning MRI scanners come to a stop, Damian’s consciousness winds up inside the body of someone who looks a lot like Ryan Reynolds (Ryan Reynolds). Damian, it would appear, has hit the lab-grown body jackpot.

At first the consciousness transfer seems to have come off without a hitch. There is a lengthy montage, reminiscent of a Rocky movie, that shows post-transfer Damian training hard to master the challenges that come with controlling his exquisite, new body. But, fighter that he is, Damian is more than up to the rehabilitation tasks. Vivid flashbacks, though, intrude on Damian’s experience and remind us that all is not right in his brave, new Reynoldsian world.

Sadly, the procedure has not gone well at all when it comes to acting. It ends up feeling like someone forgot to hook up the “personality” cable that connected Damian’s old body with his new one for the consciousness transfer.

The old Damian may have been a crusty old son of a bitch, but in the short period of time that he has on screen, Kingsley somehow lets us know that he is also a complex man who has known ample amounts of both pride and regret during the course of his life.

As portrayed by Reynolds, the young Damian never seems to emerge fully from the confused state of mind that immediately follows the consciousness transfer. Sure, over the course of the movie he winds up showing that he is still a smart adversary and a relentless competitor, but none of the texture of the character handed off to him by Kingsley survives.

The film itself has been promoted as a thought-provoking science fiction thriller that allows us to contemplate the possibility that technology may soon provide a way for us to live forever, while forcing us to consider the moral price that we might pay in doing so. Yet, as with most science fiction, the new-fangled science is only incidental to the retelling of an older, venerated story.

In this case of Self/less, this storyline is a deal with the devil. Here Damian takes on the role of an essentially noble but arrogant Faust and Albright his obsequious and beguiling Mephistopheles. The movie reminds us yet again that striking a bargain to sell one’s soul is never without unanticipated consequences.

It’s also interesting to consider is how Self/less borrows from other genres.

As it turns out, Damian’s consciousness has not just landed in a buff, young body, but it’s the buff, young body of an superbly trained U.S. Army Special Forces soldier. Although the soldier’s still resident conscious awareness is suppressed by medication, his killing instincts kick in reflexively whenever they are needed, and they are needed a lot in the movie.

In this regard the film feels a little like a variation of the action-thriller The Bourne Identity — may be it could be called The Reborn Identity? — in which the hero, a superbly trained C.I.A. killing machine, has lost all conscious memory of his former life as a spy, but is able to draw reflexively on his martial arts skills and detailed knowledge of spycraft to save the day, in spite of his otherwise complete amnesia.

But at its heart, Self/less harkens back to the genre of “second-chance” stories, such as It’s a Wonderful Life, in which death is held at bay, at least briefly, so that the protagonist can return to the world to set things right.

A classic example of this genre is Warren Beatty’s 1978 Heaven Can Wait. In that movie, Beatty’s nice-guy quarterback hero, Joe Pendleton, is snatched up to heaven before his time, and, as a result, must be parked in the body of a no-good tycoon, Leo Farnsworth, until a more suitable one can be found. This celestial mix-up creates an opportunity for Joe to right some of Leo’s corporate wrongs, fall in love with a beautiful woman played by Julie Christie, and win the Superbowl. Not bad at all as far as second chances go.

Given how religious sensibilities have changed in the last forty years, with Self/less it is oblivion, not heaven, that must wait. And Damian’s unfinished work is not all that glorious: it’s simply to rediscover the importance of family and to repair his relationship with his daughter as best he can from beyond the grave. Undoing the nefarious body-snatching enterprise that Albright has set in motion would complete his redemption.

Young Damian does succeed in his second-chance mission. My biggest regret is that old Damian, as portrayed by Ben Kingsley, was not along for the ride.
Posted by Marc Merlin at 3:49 PM No comments: