The Movie "Moon" and the Morality of the Scapegoat Bargain

[If] the hypothesis were offered us of a world in which [proposed] utopias should all be outdone, and millions kept permanently happy on the one simple condition that a certain lost soul on the far‑off edge of things should lead a life of lonely torture, what except a specifical and independent sort of emotion can it be which would make us immediately feel, even though an impulse arose within us to clutch at the happiness so offered, how hideous a thing would be its enjoyment when deliberately accepted as the fruit of such a bargain? - William James, The Moral Philosopher and the Moral Life

In his 1891 address before the Yale Philosophical Club William James pondered the origins of our "moral perceptions" and concluded that some are likely "brain-born" and that their violation elicits an autonomic sense of revulsion in us. He uses as an illustration the scheme above in which one "certain lost soul" is forced to suffer so that, somehow, the rest of humanity might live lives of unimagined happiness.

Of course the notion of the scapegoat, traditionally one punished to purchase the redemption of a community of believers, was not new with James. The scapegoat ritual described in Leviticus has been our prototype for centuries, but the practice of animal and human sacrifice in any one of a number of ancient cultures could serve just as well as an example. What James has done in his taut rendition is to both universalize the scapegoat bargain and simultaneously magnify its moral dimension. The benefits are not restricted to the members of a particular religious group, but extend to all mankind. And the price paid by the victim is not a quick and certain death but a life of unending torture.

James was not the first modern writer to confront the essential moral questions raised by the scapegoat bargain. In his novel, The Brothers Karamazov, published 10 years before James's Yale address, Fyodor Dostoyevsky explores a similar arrangement in a passage concerning the parable of the Grand Inquisitor.


Imagine that you are creating a fabric of human destiny with the object of making men happy in the end, giving them peace and rest at last, but that it was essential and inevitable to torture to death only one tiny creature ... and to found that edifice on its unavenged tears, would you consent to be the architect on those conditions?

Almost one hundred years later, Ursula K. Le Guin, first crediting James and later acknowledging Dostoyevsky as a likely influence, published her short story, The Ones Who Walk Away from Omelas, in which she explores the same moral dilemma within the confines of a small universe of her own devising.*

Although these ancient and contemporary conceptions of the scapegoat bargain differ in many respects, they are similar in that they are all metaphysical in nature. In other words, there is no physical mechanism that connects the suffering of the selected victim with the benefits others derive. In the Old Testament the connection is presumed to originate as part of the covenant between God and his chosen people. In Karamazov it emerges, by fiat, from the very "fabric of human destiny".

Nonetheless, the question could be posed: Might it be possible to reformulate this metaphysical arrangement in plausibly realistic terms? With his science fiction film, Moon, writer-director Duncan Jones has done just this.

The utopia of the near-future world that Jones imagines in Moon is, unlike its 19th-century forerunners, not one predicated on the possibility of human moral perfectibility. Instead it is founded concretely upon the availability of an inexhaustible source of clean energy, an isotope of the element helium, He3, which is used to fuel thermonuclear reactors across the face of the globe. In Moon, limitless, inexpensive, carbon-free electrical power has, it appears, eliminated the contention for resources that has historically been the root of human conflict and, in turn, ushered in a golden age of plenty, for rich and poor nations alike. 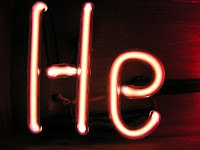 Troubling moral complications arise in this brave new energy-rich world because, it turns out, precious He3 must be scraped from the surface of the far-side of the Moon - James's "far-off edge of things" - by means of a vast mining operation which, in spite of advances in technology, is not entirely automated. This exquisitely engineered, thoroughly computerized He3 factory has one flaw, and that flaw is that it requires the services of a single human being to keep the extraction bulldozers running smoothly and thus insure an uninterrupted flow of utopia-sustaining fuel to planet Earth, a quarter of a million miles away.

For Moon this lone individual - James's "certain lost soul" - is astronaut Sam Bell, who, when he is introduced to us, is desperate to soon conclude his 3-year tour of duty on this lonely lunar outpost. At first glance Sam, dispirited and disheveled, strikes us more like a beaten-down refugee than a right-stuff-bearing spaceman. Separation from his wife and young daughter, not to mention utter isolation from other members of his species has taken an enormous emotional toll on Sam. We pause to wonder how any "modern" corporation could be so morally bankrupt as to contract for the kind of labor that would result, inevitably, in such severe psychological decline. Little do we know that the crimes inflicted by his employer on Sam - and, shall we say, others very much like him - are far worse than we even dare to imagine.

As the startling moral transgressions that underlie the scapegoat bargain in Moon are revealed, we come to appreciate how masterfully Jones and screenwriter Nathan Parker have taken the metaphysical problem outlined by James and Dostoyevsky and created a convincingly naturalist realization. Not only does Moon succeed in its own right - as a character study and as a suspense-thriller - it also succeeds as an exemplary work of science fiction in that it grabs hold of a profound, but abstract, philosophical question and recasts it as a flesh-and-blood human tale, brought to life by plausible speculation that ventures just beyond the limits defined by our current scientific capabilities.

* See this blog post, The Scapegoat in Fyodor Dostoyevsky, Ursula K. Le Guin, and William James?, by Horace Jeffery Hodges for an insightful discussion of the treatments by these three authors.