The world as we know it pretty much comes to an end by the end of Roland Emmerich's new globe-busting block-buster 2012.  My apologies if this comes as a spoiler, but, honestly, revealing that an Emmerich film finds a way to decimate the population of the planet - flora and fauna - is like revealing that a romantic comedy winds up with its initially mismatched, bickering couple entwined in each others arms as the closing credits roll.  Not exactly a surprise.

Apparently. such is the power of cataclysmic crustal displacement that no tectonic plate will be left unturned, as an infelicitous planetary alignment and a stampede of mutant solar neutrinos conspire to wipe every nation, save one, from the face of the earth.  One nation is spared this particular fate, but not because it miraculously survives the natural disasters that Emmerich serves up, but because it has met an untimely editorial demise long before 2012 went into production.  That nation is the nation of Tibet.

To watch this film is to be taken by an odd sense of geographical "dislocation", in a very literal sense of that word.

Scenes of Tibet and its people appear early on.  Indeed, images of Tibet, including one of an iconic maroon-and-yellow-robed Tibetan Buddhist monk gazing meditatively as a tsunami sweeps across the mountains of the Tibetan Plateau and a Tibetan monastery is engulfed by waves in the distance, have been used to promote the movie.  It is a Tibetan family whose acts of compassion and heroism deliver the American Curtis family, the featured characters, to a safe haven in the final act of the film, which unfolds on the crucial high ground surrounding Mount Everest, which itself lies near the border of present-day Tibet and within the land claimed by the ancestral Tibetan kingdom.

But the word "Tibet" is never uttered in the film.  It is even absent from the map that is used by the Curtis family to direct their flight across a crumbling continent and a tsunami-riddled ocean to safety.  Their destination is China, only China, a vast, monolithic China.  It is as though, for purposes of 2012, Tibet has become "the province that dare not speak its name".

Now, what may appear, superficially, to be an act of omission is anything but.  The elimination of references to Tibet in the film is the result of a high-level financial calculation, and it is also an illustration of what happens when the standing of a culture perched on the roof of the world runs afoul of the bottom-line of one of the most expensive movies ever made.

The fact of the matter is that the cost for making and marketing 2012 is estimated to exceed a quarter of a billion dollars.  There is no way on God's green earth - or on Roland Emmerich's lava-riven one - for the people and corporations who invested in that film to turn a profit without massive international ticket sales.  Critical participants in that prospective box-office are tens of millions of Chinese movie-goers.  And there is also no way, given the current political climate, that the People's Republic would tolerate the distribution of a mass-market film that placed Tibet or Tibetans anywhere near front and center.

Be that as it may, I must admit to being taken aback that Emmerich's kowtowing in response to either actual or to anticipated editorial demands by the Chinese authorities would result in the removal of every mention of Tibet from the 2012 screenplay.  Sadly, given the money at stake, some amount of obsequiousness on the part of the director could have been expected, but what Emmerich has done here by tossing Tibet under the bus - or the ark, as the case may be - approaches the Orwellian.

The phrase "memory hole" was devised by George Orwell in Nineteen Eight-four, his classic dystopian novel set in a near-future totalitarian state, as a nickname for the chutes into which potentially damaging or embarrassing political documents - even scraps of paper - were tossed to be incinerated and thus expunged from the historical record.

From all appearances, every allusion to Tibet was excised from the production documents of 2012 by is creators, and the resulting scraps of paper were collected and tossed down a Tibetan memory hole, one made to order for the film.

Admittedly, artists make compromises to realize their most cherished visions.  But what artistic vision was realized by Roland Emmerich in making of 2012 that was so worthy that it demanded that he purge the words "Tibet"  and "Tibetans" from his movie, inconvenient bits of truth, jettisoned in the pursuit of globe-busting box-office receipts?  Unfortunately, the answer is, "none at all."

2012 - Who Lost Tibet? by Marc Merlin is licensed under a Creative Commons Attribution-Noncommercial-No Derivative Works 3.0 United States License.
Based on a work at thoughtsarise.blogspot.com.
Posted by Marc Merlin at 8:08 PM 4 comments:

District 9 - Yes, We Need Another Hero

I've been working on a essay about Neill Blomkamp's "District 9" since late summer and it has morphed into a dissertation.  What follows is a summary - my take on the movie as a first installment in a film saga that a re-imagines the "hero's journey" in new and interesting ways. 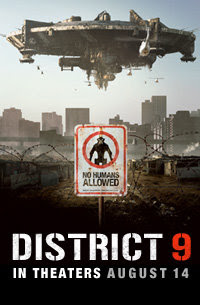 Cutting-edge science fiction films are expected to be technically ambitious, to employ the latest in computer-generated imagery and bring to life alien creatures, other-worldly environments and marvels of engineering which previously existed only on the printed page or in a director's imagination.

Neill Blomkamp's District 9 succeeds in this regard. And it does so in a way that reminds us that special effects are most - shall we say - effective when, like accomplished supporting actors, having been introduced with modest fanfare, they retreat from the limelight and allow the lead performers to get on with the show, all the while laboring diligently, but unobtrusively, in service of the production.

We are accustomed to our cinema heroes being promoted from the ranks of rogues. They may start off as hard-boiled detectives or egoistic renegades, for example, but they are soon revealed to be fundamentally decent, and even to posses the capacity for selfless courage. Such reluctant heroes are good - even noble - men, beaten down by life's tragedy or by lost love, who have cynically turned their backs on the world of good deeds.

This is not at all the case with Wikus Van De Merwe (Sharlto Copely), the more-than-reluctant hero of District 9. We first meet him in a non-descript contemporary office setting where he is an undistinguished middle-level bureaucrat, a cog in a paramilitary corporation that goes by the name Multi-National United (MNU).  (Think Blackwater Worldwide on steroids.)  MNU has been contracted to manage the lives of the million or more extraterrestrial castaways, referred to disparagingly as prawns, who have been marooned in Johannesburg, South Africa since 1989.

Twenty years on, the prawns live in a squalid squatter community, the District 9 of the movie's title, on the outskirts of the city. Disliked and unwelcome, they are about to be forcibly relocated to a new home miles away, which turns out will be little more than an out-of-sight concentration camp. Possessing none of the ambition that it would take to advance on his own, Wikus has been designated by his scheming father-in-law, a high-ranking MNU executive, to lead the prawn eviction. 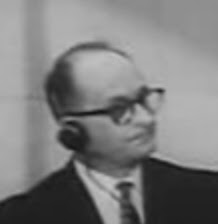 Although the epithet "little Eichmann" has been recklessly misapplied of late, it is hard to come up with a more fitting characterization for Wikus. Like Adolf Eichmann, the architect of Hitler's final solution, Wikus is not a bad man, at least according to any superficial reckoning. Friendly and self-effacing, he offers a ready, if somewhat nervous, bonhomie to co-workers and strangers alike. Hardly menacing, so desperate is he to avoid confrontation that he comes across as a dithering coward. And, to seal his "good man" bona fides, Wikus is a devoted husband to his beloved wife, Tania (Vanessa Haywood). So besotted is he with her, that the mere mention of her name sends him into a worshipful reverie.

But Wikus is also professionally engaged in a monstrously brutal enterprise, one which asks him to commit morally reprehensible acts as a matter of daily routine. For example, he does not hesitate to threaten the well-being of a prawn child in order to elicit compliance from its father with a relocation order. Similarly, for nominally "hygienic" purposes, Wikus orders the torching of a nursery of prawn larvae, explaining to the camera crew documenting the eviction that this approach to the problem is far more efficient than the cumbersome procedure of destroying the developing infants one-at-a-time.

What distinguishes Wikus, a veritable Eichmann manqué, from the maestro himself is that he is not the author of the oppression that he dispenses. Not much more than a rule-bound MNU functionary, he follows orders and does his job, all the while trying not to draw much attention to himself. In fact, Wikus is  thrown off balance by the promotion that his father-in-law foists upon him. No company man, he would prefer, given the option, to be at home with his adored Tania, basking in the glow of their eternal puppy love.

To put it bluntly, the problem with Wikus is not so much that he is evil, the problem is that he lacks a soul.

The challenge for Blomkamp in District 9 is, therefore, to stir Wikus from his ethical torpor, to awaken him to the reality of the suffering of others, to afford him the opportunity for redemption for his sins, and to launch him on the essential hero's quest, and that is the quest for a deeper understanding of oneself and a more humane appreciation of a wider world.

In this way District 9 announces itself as the first installment of a film saga in which Wikus, an unlikely Ulysses, is forced kicking and screaming into a miserable exile - ironically in plain sight - whence he begins his own odyssey, a desperate struggle to find his way back home and back into the arms of his beloved Tania.

Blomkamp's creative re-imagining of the beginning of this epic story is both creative and exciting.  I look forward to seeing how Wikus's voyage continues.

District 9 - Yes, We Need Another Hero by Marc Merlin is licensed under a Creative Commons Attribution-Noncommercial-No Derivative Works 3.0 United States License.
Based on a work at thoughtsarise.blogspot.com.
Posted by Marc Merlin at 4:29 PM 3 comments: