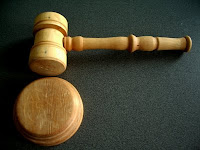 Indeed, the interview and the 5-part series that it previews, Is This Your Brain on God, could be confused with a promotional campaign for Hagerty's upcoming book. Here NPR's own standing as fair "judge" could be called into question. Is Hagerty's book being featured for its merits or is it, to some extent, receiving the spotlight based on its author's long relationship as a reporter for the news organization? To the extent that Hagerty takes a disputed position on a matter of public importance, isn't it incumbent on NPR to present alternative points-of-view? I'm not sure whether NPR, like the New York Times, has a public editor to consider such concerns, but it would seem that its own journalistic standards would demand such consideration.
Posted by Marc Merlin at 6:29 PM No comments: