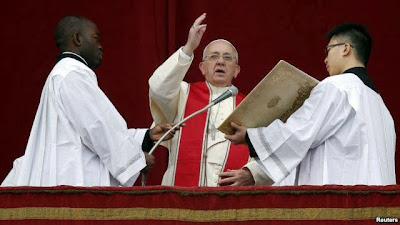 VATICAN CITY - In his first Christmas Day speech as leader of the Catholic Church, addressing a crowd of some 70,000 people from the balcony of St. Peter's Basilica, Pope Francis called for "peace to mankind." And he asked for everyone "who hopes for a better world" to join him in this "heavenly song."

But the Pope went on to say that wishes and hope are not enough to make the world a better place. That task requires hard work and courageous decisions. So, in that spirit, the Holy Father expanded on his seasonal message by declaring a reversal of the Church's long-standing opposition to same-sex marriage and the participation of women in the Catholic priesthood.

Most remarkably, recognizing that two of the scourges that have afflicted mankind since its fall from grace, hunger and infectious disease, could be alleviated with a stroke of his pen, Pope Francis announced that the world's community of 1.2 billion Roman Catholics would now be free to use contraceptive practices according to their own desires as led by the lights of their own consciences
Posted by Marc Merlin at 10:00 AM No comments: