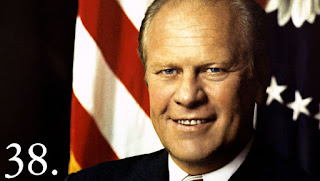 Amid the chorus of calls this week for impeaching President Donald J. Trump, not enough attention is being paid to words of wisdom on the matter offered by none other than former president Gerald R. Ford.

Gerald Ford is not the most quotable of presidents. He is better known for his gaffes - take for example his claim during the 1976 presidential debate with Jimmy Carter that "there is no Soviet domination of eastern Europe, and there never will be under a Ford administration” - than for his stirring oratory.

That said, Ford was a seasoned political operator, who served as the Republican house minority leader for almost nine years before being tapped to replace disgraced Spiro Agnew as vice president of the United States. In that legislative capacity, in 1970 long before Watergate was a glimmer in anyone’s eye, Ford championed the impeachment of Supreme Court Justice William O. Douglas. It wasn’t Ford’s finest hour, to say the least.

The problem for Ford was that there wasn’t a lot of there there, as they say, when it came to identifying Douglas’s impeachable offenses. The U.S. Constitution is rather vague on the matter, saying only that civil officers may be removed for "treason, bribery, or other high crimes and misdemeanors." Ford, driven less by Douglas’s demonstrable crimes and more by resentment of his liberal opinions and Richard Nixon’s recent failed nominations of Clement Haynsworth and G. Harrold Carswell to the Supreme Court, was undeterred, proclaiming on the House floor,

“An impeachable offense is whatever a majority of the House of Representatives considers it to be at a given moment in history.”

Now, Ford’s point was that the House was not constrained by actual legal statutes in determining whether to indict a sitting president. (Impeachment is an indictment by the House on charges that are forwarded to the Senate for trial.) But what makes Ford’s observation salient now, is that it cuts both ways: the House is also not obligated to consider a violation of law as an impeachable offense, either.

This fact underscores the ultimate futility in calling for the impeachment of Donald Trump at this point in time. I’m not saying that calling for Trump’s impeachment isn’t a useful tactic. Indeed, anything that keeps this president and this administration rattled and, as a result, frustrates their attempts to move forward with their damnable legislative program is a good idea. What I am saying is let’s not confuse a political tactic for a political strategy.

The mistake that the left made in the 2016 presidential election and continues to make to this day is believing that our outrage over Trump is somehow communicable. We imagine that if we can only get Republican lawmakers and their constituents to see how dangerous the guy is that they, in the country’s best interest, will join us in removing him from office. This isn’t going to happen.

The GOP leadership was entirely unfazed by the president’s firing of James Comey this week, with Iowa Republican Senator Charles Grassley, according to the New York Times, speaking for many of his colleagues when he scoffed at the furor on the left by saying, “suck it up and move on.” In their characteristically cynical way, the Republicans in the House and Senate have their eyes squarely on a government-busting legislative agenda, and they are not going to let the opportunity to enact it be side-tracked by a lengthy and tumultuous impeachment process. If you believe that appeals to their basic integrity will save the day, then, as far as I’m concerned, you’re living in an alternate reality.

And as far as most of their constituents go, we also need to disabuse ourselves of the notion that they will somehow come around to seeing the constitutional light. These people believe in their heart of hearts that all the clamor for impeachment is nothing more than a way to deprive them and their man of the fruits of a hard-fought electoral victory. And they believe, as does their leader, that all the talk about collusion with the Russians to influence the outcome of the November 2016 election is nothing more than sour grapes writ large. There will be no changing their minds in this regard.

The good news is that impeachment of Donald Trump in 2019 is a possibility, assuming that Democrats can claim a majority in the House in November 2018. Even without a majority, significant Democratic gains will frustrate GOP legislative efforts to ramrod their contemptible programs down our throats.

But this is not going to happen as a result of trying to convince the opposition that Donald Trump is a criminal deserving of impeachment. It’s going happen if we, instead, think strategically and direct our time, money, and resources into challenging voter ID laws, defending and extending access to the polls, targeting crucial, key elections, and encouraging people who are new voters or disillusioned ones to participate in the electoral process. This is how we win.
Posted by Marc Merlin at 3:17 PM No comments: