Through a Universe Darkly 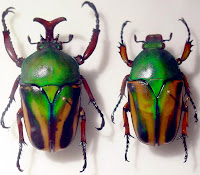 "An inordinate fondness for beetles." This is how the eminent evolutionary biologist, J. B. S. Haldane, is reported to have replied when asked by theologians to speculate, based on the character of the biological world, what may have motivated the Creator when he undertook its initial design.

No doubt, they had hoped for a more inspirational answer.

Yet Haldane, a pioneer in mathematical genetics, was absolutely right. He had done the arithmetic, so to speak. At that time over 350,000 species of beetles had been identified, comprising half of all the known insect species. What better insight, then, could one divine concerning divine intention? From all appearances, God played favorites in the animal kingdom, and beetles were at the top of His list.

It's not hard to imagine that a latter-day Haldane, steeped in astrophysics instead of natural history, might be confronted with an analogous theological challenge. What does the character of the physical universe that we inhabit reveal about the mind of the Creator who set things in motion some 14 billion years ago? What insights can we derive about Him from our determined investigations of his His creation?

"An inordinate fondness for dark energy," would be a fitting response. 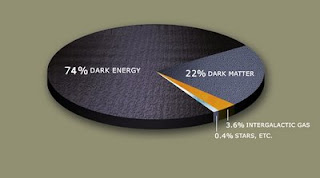 Following Haldane's lead, let's do the math. According to analysis of the results from the Wilkinson Microwave Anisotropy Probe (WMAP), a satellite launched in 2001 to measure the cosmic background radiation - the electromagnetic afterglow of the primordial Big Bang - to unprecedented precision, our universe consists of 74 percent dark energy, 22 percent cold dark matter and 3.6 percent interstellar gas, leaving a paltry 0.4 percent to the atoms which make up not only nebulae and stars but also the flotsam and jetsam, our home planet for example, that orbit around them.

Among these constituents, dark energy is the new kid on the astrophysical block, proposed in 1998 to account for the discovery that the universe is expanding at an ever-increasing rate. Currently no one quite knows what dark energy is. It could be the physical manifestation of the long-suppressed cosmological constant from Einstein's first formulation of his theory of general relativity. Or, it might represent an entirely new type of matter, a background field of particles that permeates the so-called vacuum of space. Whatever dark energy is, its existence is required to make sense of the large scale structure of the universe as indicated by increasingly accurate measurements from experiments such as WMAP. 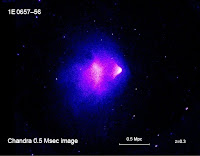 As with dark energy, dark matter is a name given to a form of matter whose composition has not yet been determined. In spite of this, astronomers are convinced that it exists, because, without it, the observed motion of galaxies within galactic clusters would be impossible to explain. Such galaxies maintain long-term stable configurations, yet the mass of these gravitationally bound systems, as estimated by adding up that of their readily observable constituents such as stars, is not sufficient to keep them from flying apart. Something must be missing, and the missing something that solves this problem has come to be called dark matter. Although the detailed properties of dark matter remain a mystery, confidence in its existence continues to increase, supported, in part, by recent observations of the colliding galaxies that form the Bullet Cluster.

The most remarkable thing to be said about unremarkable intergalactic gas, which consists of a lone hydrogen atom spaced every cubic meter or so, is that there is so much of it, at least relative to the amount of matter that we find in our immediate neighborhood.

Finally we come in our astrophysical inventory to the category of galactic atoms, weighing in at about one-half of one percent of the entire mass of the universe. A significant fraction of these are hydrogen nuclei, engaged in - or acting as bystanders to - the phenomenon of thermonuclear fusion that powers the stars. Hardly meriting arithmetic mention are the the other naturally-occurring chemical elements, the ones that make up everything from planets to plutoids, from people to petunias. Although "rain drops on roses and whiskers on kittens" are, arguably, a few of our favorites things, they and their kind of material stuff appear not to have meant much to the Creator in His grand design, at least as far as the allocation of mass and energy was concerned.

Returning now to the theological question that opened this discussion, as in Haldane's time, most theologians - indeed, most believers - today look for inspiration in the prospect of a creator God. Yet attempts at an objective reading of creation as the unfolding of a divine plan leaves one contemplating more a slap-dash muddle than a carefully drafted blueprint. To the extent the Creator had humans in mind in the beginning, He chose bizarrely inefficient means to go about creating them. It would seem that an omnipotent being could have done without adding so much dark energy and so many kinds of beetles to the cosmological mix. As far as science can tell, our species is an unintended consequence of the undirected physical processes that gave rise, first to space and time and matter, and, much later, to life on earth.

Through a Universe Darkly by Marc Merlin is licensed under a Creative Commons Attribution-Noncommercial-No Derivative Works 3.0 United States License.
Based on a work at thoughtsarise.blogspot.com.
Posted by Marc Merlin at 9:04 PM