The unexpected science subtext of George Miller's 3,000 Years of Longing 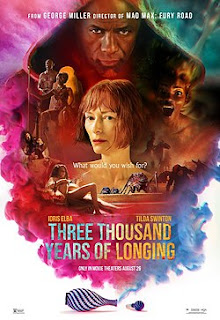 George Miller’s lavishly produced recent film, “3,000 Years of Longing,” could be described as a sort of Aladdin for adults. It is the retelling of a tale from Scheherazade’s 1,001 Arabian Nights set in our mythology-leary world. And, contrary to expectations, if one digs beneath the surface, a surprising story about science reveals itself.

That science will play a role in this reformulation is hinted at early on in the movie. Alithea Binnie (Tilda Swinton), a “narratologist” by trade, is arriving for a storytelling conference in modern day Istanbul. Her grip on reality is called into question when we watch her spy a diaphanous, gnome-like man trying to run off with her baggage cart at the airport. Unwelcome apparitions like him continue to appear, unbidden, at the conference’s keynote lecture where a distracted Alithea pauses to declare that the tales of gods and heroes of ancient times have been vanquished to the dustbin of history. According to her, scientific explanations now rule the day.