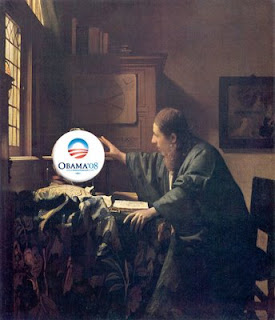 If you are like me - which I sincerely hope is not the case - you struggle at times to continue to hold your fellow citizens in even modest regard. Being subjected to daily sound bites from the refrigerator-magnet word salad that masquerades as a Sarah Palin campaign speech makes that struggle even harder.

But take heart, dear friends! Hope is at hand for sufferers of TCCS (Terminally Cynical Curmudgeon Syndrome), like me. The Obama Obicycle has now been demonstrated, in limited clinical trials, to drastically reduce the symptoms of TCCS. It is rumored that a full-fledged cure will be announced the first week in November.

Honestly, it continues to be throughly therapeutic for me to bike around Atlanta with my Obama bike-trailer rig. The first bicycle trip of the day took me to the High Museum of Art to attend a member preview of The Louvre and the Masterpiece, which opens Sunday and runs through September of next year. (The photo accompanying this post is a subtly altered version of Johannes Vermeer's The Astronomer which, in my mind, is the highpoint of the exhibition.)

As has become customary with the Obicycle, I was serenaded by the tooting of horns and exhorted with the waving of hands as I pedaled my way to the museum in Midtown. When I arrived there I intentionally made a circuit of the wonderful plaza created with the completion of the Renzo Piano addition to the High a few years ago, before moving on to find a less conspicuous place to lock up. My showy entrance on the scene had the effect of attracting a bit of attention, so, as I walked up to the Weiland Pavilion to tender my admission ticket, a number people - visitors and staff - approached me to congratulate me on the Obicycle, to share their hopes and concerns about the election, and to request photo opportunities with me and the bike.

As I had promised the admiring fans, after I finished viewing the exhibit, I fetched the Obicycle and returned the plaza to be photographed. Since I needed to retrieve my messenger bag from the check counter, I left the Obicycle unattended for a few minutes while I ran inside. (I imagine that its conspicuousness makes it relatively theft-proof, at least for short periods of time, although I do worry about McCain-Palin saboteurs.) When I returned, much to my surprise, a small group of tourists had gathered to take turns photographing each other posing with the Obicycle.

What a kick I got out of that display! Maybe my days of TCCS suffering are behind me, after all.
Posted by Marc Merlin at 1:12 PM

Brother Marc,
I am proud to be the sister-in-law to such an inspirational politician as you. You have always been one to walk the walk or in this case, bike the bike. I am feeling more optimistic myself about Nov 4th, although I am going to beat the crowds and vote early.