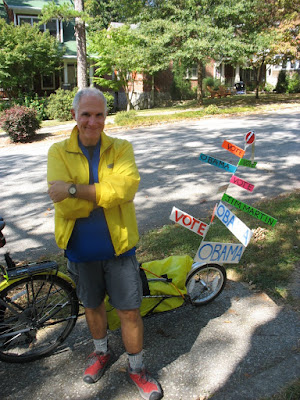 The newly christened Obama Obicycle made its inaugural voyage yesterday with Captain Marc Merlin at the helm and first mate - and photographer - Hillary Felker at his side. They came up to speed as they exited the tranquil waters of Lake Claire harbor Tuesday morning and carefully steered their way through the narrow, but not treacherous, straits of the City of Decatur, with the Dekalb Farmers Market as their intended destination and first scheduled port of call.

The weather was near perfect and there was nary a suburban frat boy pirate to be seen, as they navigated the waterways of E. Ponce de Leon Avenue, basking in the toots of horns from admiring fellow seafarers passing by.

Nautical metaphors aside, it was, in fact, difficult to pedal more than a block or two on the Obama Obicycle without being greeted with a shout-out of approval or a hearty thumbs up. People in Atlanta are really pumped about the prospect of an Obama victory in the upcoming election and they are happy to share their enthusiasm.

On our return home from the market, Hillary and I paid a call at the Dekalb Obama office - 2752 E. Ponce de Leon Avenue - and rousted the workers and volunteers there to come out and take a look at our bicycle convoy. Needless to say, they were impressed, although it does remain to be seen whether the photo they took of us will find its way to the national campaign website. We can only hope.

Since this morning I have taken the Obama Obicycle out on a number of trips, and I can honestly report that I receive enthusiastic shows of support wherever I go. This kind of encouragement tells me that maybe - just maybe - we will soon have national leaders and national policies that we can be proud of once again. That is, of course, only if we remain focused these last few weeks of the campaign and only if we remain determined to make sure that our votes - and those of our friends and families - are both cast and counted.
Posted by Marc Merlin at 11:48 PM

Obama/Biden: Boldly going where no man has gone before!