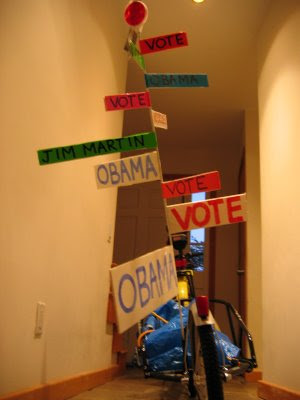 Well, today was the deadline in Georgia to register to vote for the November election, so, according to plan, I lifted my cloak of (ostensible) bipartisan invisibility and switched my bike trailer from its alter-ego guise as an unassuming, mild-mannered "register-to-vote-here" mobile voter registration station to its bold, battle-ready incarnation as a partisan Democrat campaign vehicle - one that I am calling the "Obama Obicycle".

A five-minute test drive around my neighborhood was greeted mostly with honking horns and howls of approval. How sweet it is!

Nevertheless, a car-full of young men, from the suburbs I imagine, one flaunting a McCain-Palin t-shirt, apparently on their way to Little Five Points to sample the pleasures of the degenerate, left-leaning popular culture of which their candidates most certainly disapprove, called out, accusing me of consorting with terrorists, encouraged by the latest Sarah Palin initiated "gutter politics" attack.

What to say? "You guys could have been friendly (I had waved to them), or you could have been assholes. You decided to be assholes, just like your know-nothing attack-dog vice-presidential candidate. Do you have any idea what part of town you are in? Welcome to Atlanta and good luck!"
Posted by Marc Merlin at 7:36 PM

So nice to be among those mild mannered ATL degenerates, of whom there are many to share a kind heart and some forward politics. Cheers!

This is just great! Exciting! I hope you cover many, many miles in the next 30 days and I wish you mostly happy trails, with few a--holes along the way. Want to borrow my OBAMA T-shirt??

Brilliant!! You are an inspiration! I work at Emory, but live among the very cretins you described, so I feel your pain! Take heart in that there are those of us infiltrating those enemy lines as well, taking one for the Obama team!!

I love it and hope there will be many imitators in the next few weeks. Thank you for doing more than your share!