Hanna's Choice - Ethics and "The Reader" 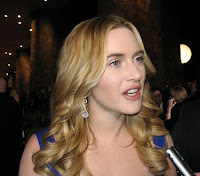 Spoiler alert - This post reveals elements of the plot of the movie "The Reader".

In "The Reader", a recent film by director Stephen Daldry, Kate Winslet portrays Hanna Schmitz, an attractive but world-weary woman in her thirties who begins a summer-long affair with a handsome and mature-beyond-his-years 15-year-old, Michael Berg, played by David Kross.

It is 1958, and the devastation wrought on Berlin by the war is still visible. What lies unseen are moral wounds still festering beneath the surface of relatively normal German life. For these to heal they must be exposed. Scars must form so that conscience can grow anew.

The affair ends abruptly when Hanna recognizes that Michael's infatuation with her is preventing him from cultivating the kind of age-appropriate relationships that he needs to grow and get on with his own life. She packs up and flees her Berlin apartment in a scene that feels in some ways like an act of reluctant self-sacrifice and in other ways like the mechanical execution of a well-rehearsed escape plan.

A half-dozen years later and Michael is attending law school in Heidelberg, wrestling in class with the questions of the ethical responsibility for the war crimes committed two decades before. The local trial of six women accused of such crimes - guards at a concentration camp assigned the task of selecting inmates to be exterminated and complicit in the deaths of hundreds more locked in a church set on fire by Allied bombs - presents Michael's professor and fellow students with the opportunity for an unusual field trip. It turns out, to Michael's surprise and dismay, that Hanna Schmitz is one of the accused.

While the trial itself explores the broader - and well-trodden - issues of having to do the just-following-orders defense of Adolph Eichmann and innumerable others, Michael finds himself confronting a different sort of ethical dilemma. During the course of the tribunal he comes to realize that Hanna is illiterate - which accounts for her insistence that he read to her as part of their lovemaking - and that her illiteracy can serve to significantly reduce the sentence that she will receive, if found guilty by the court.

Hanna is, in her childlike way, perplexed by the legal proceedings, taking full responsibility for her war-time role, and naïve enough to not appreciate that her co-defendants will use her forthrightness to make her the fall-guy for the gravest of their criminal deeds. She is, though, not so much a naif that she doesn't understand that the fact of her illiteracy may exempt her from harsher punishment. Nevertheless, she is so deeply ashamed of her inability to read that she would rather languish in prison for years than to reveal her secret in this most public way.

Michael's ethical challenge - and the central ethical question of the film - is made concrete. How do we determine whether we should act on behalf of others when our estimation of what is in their best interests contradicts their own? Is Hanna's choice to keep mum, in and of itself, an indication of a diminished capacity, or is she entitled, as other competent adults, to be the final arbiter of what it is that she holds dear? Is Michael obligated to violate Hanna's personal integrity so as to keep her from spending much of the remainder of her life behind bars?

Thus Hanna's choice becomes Michael's choice and, in doing so, it demonstrates the complexity that underlies Cain's evasion, "am I my brother's keeper?" It is a choice that dooms Michael to a life of regret, no matter how he decides, and imprisons him in much the same way that it imprisons Hanna. Perhaps this is a penitential sentence he must bear as part of the German generation born in the midst World War II, a kind of atonement for the crimes of others that can only be expunged by years of reflection and internal struggle.

Hanna's Choice - Ethics and "The Reader" by Marc Merlin is licensed under a Creative Commons Attribution-Noncommercial-No Derivative Works 3.0 United States License.
Based on a work at thoughtsarise.blogspot.com.
Posted by Marc Merlin at 10:43 AM

Have not seen the movie so I did not read the blog but I want to keep my streak of comments alive. Go for it Bro!

Great commentary as always.I saw the movie and I agree with you. Ernestine Schlant's book Language of Silence:West German Literature and the Holocaust deals with the German guilt. Your commentary echoes many of the same sentiments Shlant disccusses in her book.

Movies can and do have tremendous influence in shaping young lives in the realm of entertainment towards the ideals and objectives of normal adulthood.