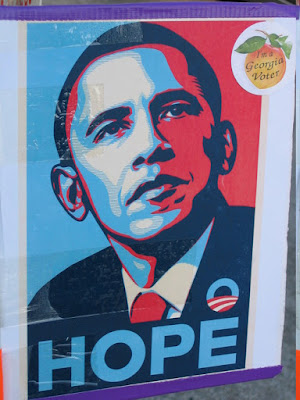 This is the hope that an Obama victory brings to traditionally-red states, such as Georgia. This is why I believe that a Georgia vote for an Obama victory will count, no matter what. This is a change that I can believe in, because it's happening right in front of me, right now.
Posted by Marc Merlin at 4:06 PM

A close vote in Georgia would be very significant for a number of reasons, in addition to potentially helping but Jim Martin over the top.

First, it will encourage future Democrats to campaign here. That's what we need to move Georgia to the progressive column

Second, it will help build legitimacy for Obama, as he seeks to be president of the entire US and not just 50.1% of the voters.

I think this desire to represent the whole country is a vital part of Obama's "new politics."

I believe in the Power of the Obama Obicycle!