Just to fend off some of the disapproval that I know I've already provoked, I want to say that I think Obama has the intellect, legal expertise, and the judicial temperament to make for a great Supreme Court Justice.

Indeed, the matter of temperament is of paramount importance. No one has shown more of a commitment to the dispassionate consideration of the most divisive issues facing this country than Barack Obama has over the last eight years, this in spite of relentless attacks on his efforts to reach sensible political compromise.

To put it simply, the presence of an Associate Justice Obama would turn the Supreme Court Building into a third ring of the the Washington political circus that now includes the White House and the U.S. Capitol. And a Justice Obama would suck the air of the room of any oral argument before the court.

The obvious objection to the above claim is that we've been there and done that. William Howard Taft, the 27th President of the United States (1909–13), served as the country's tenth Chief Justice (1921–30). The Supreme Court didn't crumble as a result of his tenure there, so there's no reason to believe that a repeat performance by the 44th President of the United States in the capacity of an Associate Justice should raise any cause for alarm.

In response, first of all consider that Taft took on his Supreme Court gig a good eight years after leaving the office of President. I suspect that this cooling off period went a long way toward making Supreme Court deliberations less fraught with the political issues that Taft had to deal with during his time as president.

Second, and more importantly, the power and prestige of the office of the President of the United States have changed immeasurably since 1921. To understand this, it's instructive to look at a story that comes from the ex-presidency of Harry Truman, a little more than sixty years ago. 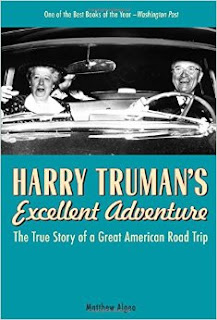 In June of 1953, not much more than sixth months after leaving office, Harry Truman and his wife Bess packed up their Chrysler New Yorker and headed across country on a road trip. Just the two of them.

It's hard to imagine that the man who had been commander-in-chief of U.S. armed forces at the end of World War II - and who had also survived two assassination attempts - was out touring the country in the family roadster without the company of either a press entourage or a Secret Service detail. This presidential escapade is nicely documented in Matthew Algeo's "Harry Truman's Excellent Adventure: The True Story of a Great American Road Trip" (Amazon link).

If you imagine that Barack Obama's assuming a seat on the Supreme Court in 2017 would be not much more of a disruption than William Howard Taft becoming Chief Justice in 1921, then I invite you to consider how well an "excellent adventure" by the Obama family on a road trip alone into the American heartland would play out today.