This is a reposting of my short Facebook note on Crazy Heart.  It does contain spoilers.

In a milestone role to rival his iconic turn in The Big Lebowski, Jeff Bridges gives us in Crazy Heart the character Bad Blake.

Bad, a 57-year-old country-music singer-songwriter in the process of personal and professional self-destruction, believes that a long-sought duet with sideman, now rival, Tommy Sweet (Colin Farrell) is what he needs to resuscitate his more than moribund career.  Little does Bad realize that his true redemption lies within the constellation of other duets that define his life.

- There is the well-rehearsed, bickering call-and-response standard that pampered-star Bad belts out with his long-time manager, like the profane, but choreographed, squabbling of an old married couple, which hardly conceals the affection that has bound them together over the course of decades.

- There are the tawdry pas de deux that lothario Bad performs with his adoring female fans, middle-aged woman who seek him as a last opportunity to taste the passion that the everyday world has denied them, as he seeks in them refuge from the pain and loneliness of his life on the road.

- There is the reassuring ballad of friendship that wayward Bad shares with Wayne (Robert Duvall), a steadfast beacon in his storm-tossed life, who stands ever ready to guide him home and, ultimately, to safe harbor.

- There is the ancient song of invocation that poet Bad sings to beckon his muse, Jane (Maggie Gyllenhaal), a beautiful younger woman who stirs the creativity buried within his misery, and then, as muses must, returns to the realm of his dreams.

- There is the lullaby that erstwhile daddy Bad coos lovingly to Jane's 4-year-old son, Buddy, a moment of grace that allows him to imagine, if only briefly, the possibility of second chance at fatherhood, his first having been squandered in the recklessness of his youth. 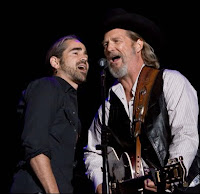 - And then there is the true father-son duet which Bad eventually does perform with his one-time apprentice Tommy, a hard-fought lesson that genuine success for Bad has to do with finally learning how to yield center stage and share the spotlight.

What Jeff Bridges and director Scott Cooper have done In Crazy Heart is to orchestrate this chorus of pair-wise songs - each moving in its own way - to create the compelling and memorable character of Bad Blake, and, in doing so, they remind us, how each of our lives is composed, fundamentally, of a similar arrangement of intimate duets.

"Crazy Heart" - Just Duet by Marc Merlin is licensed under a Creative Commons Attribution-Noncommercial-No Derivative Works 3.0 United States License.
Based on a work at thoughtsarise.blogspot.com.
Posted by Marc Merlin at 1:59 PM