This is the third in a series of essays on James Cameron's recent landmark science-fiction film Avatar.  Unlike the preceding posts, this one does contain spoilers.

Immediately lauded as a masterpiece of technical film-making and, simultaneously, disparaged for its lackluster story-telling, James Cameron's Avatar offers us something else to consider.

Although reviews often mention that the title is taken from the term for the character an individual adopts as a representative in a multi-user game or simulated community - avatar itself is the Sanskrit work for the descended incarnation of a Hindu deity - not much has been said about how thoroughly the director has fashioned a story that recreates many of the features of a video game.

Avatar is set in the year 2154 on the world of Pandora, a paradisaical moon of a gas-giant planet orbiting a nearby star and inhabited by race of tall, graceful, blue-skinned anthropoids, the Na'vi.  There our hero, ex-marine Jake Sully, a paraplegic as a result of a combat injury on Earth, has been tasked to control - more aptly, to inhabit - a hybrid human-Na'vi body, genetically tailored especially for him.  This "meat puppet", to borrow a coinage from William Gibson, enables Sully to pursue his assigned mission in the hostile Pandoran environment without the use of life-support equipment and to insinuate himself within the native population.

The perfect projection of Sully's consciousness into the body of his avatar over arbitrary distances is accomplished by use of what could reasonably be described as an electronic sarcophagus.  When Sully climbs into this high-tech cocoon, lies down, empties his mind, and closes his human eyes, a seamless "psionic" connection is instantly formed, and his blue-skinned alter ego opens his eyes - in a literal flash.

So begins one of many cycles of digital death and rebirth for Sully, as his avatar ventures deeper and deeper into the world of Pandora, there to refine his physical prowess, to expand his knowledge of the Na'vi and their habitat and, bit by bit, to heal his war-ravaged soul.

The correspondence of Sully's hero's journey to that of a player in a fantasy role playing game is almost exact: Sully's avatar is his character in the game; the electronic sarcophagus is his exquisitely engineered game controller; each of his excursions into the world of the Na'vi is a turn of the game, and an opportunity to acquire knowledge or a skill that is critical to the advancement to the next level of play.  Likewise, Sully's progress is marked by the kind of achievements that are the expected rewards which come with mastering a video game: the ability to travel safely through and fight adroitly in a challenging new environment, a facility with novel types of weapons, the recognition of admiring peers - and defeated rivals - leading to enhanced status within a community of worthies; and, of course, the coveted sexual relationship with the most desirable of the native females, Neytiri, who is herself an accomplished warrior. 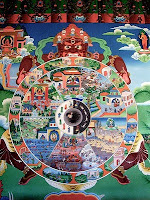 In addition, much like an adept in a video game, as a result of his diligent striving, Sully gains access to the esoteric spiritual wisdom of his guest world.  Armed with this knowledge he is able to lead the Na'vi to victory in the climatic battle of the film and, as final reward, shake off his damaged mortal coil, leave the community of venal, small-minded humans behind, and take up his rightful place - restored in body and purified in spirit - on Eden-like Pandora among the noble Na'vi.  Game over, Dude!

What is striking in Cameron's realization of this premise is not only the way he uses his film to create parallels with on-line games, such as World of Warcraft, but also the way he suggests similarities with the cultural context in which these games are played.  In this, our ordinary world, (mostly) adolescent males, debilitated not as a result of war wounds but due to persistent coach-potato inactivity, build their own makeshift electronic coffins out of available materials - such as sofa cushions and closed bedroom doors - into which they then climb to escape the demands of social interaction and the nagging of parents or girlfriends.  With only modest exertion and the assistance of state-of-the-art game controllers, they are reborn as rampaging heroes in an alternate digital universe.

As compensation to the (mostly) real-world women cast aside by these self-exiled virtual combatants, Cameron offers this, the prospect of profound and effortless communion with their men by use of luminous bundles of exposed neural fibers which the Na'vi sport as ponytails and which function as a sort of digital biological interface for unmediated person-to-person connection.  Given the solitary nature of on-line gaming - which makes conversation with already emotionally unavailable partners effectively impossible - this is a ray of hope that the game world itself will provide relief from the frustration with the failed conventional approach to building relationships, one which relies on spoken words to communicate thoughts and feelings and states of mind.  Surprisingly, because of the appeal of this fantasy solution to girlfriends left behind, it appears that Avatar succeeds in a small way as something of a chick-flick, too.

And so, with Avatar, James Cameron has delivered not only an imagined world which is, in many respects, the realization of a video game, but also one  which is a reflection of the effects this on-line gaming phenomenon has had on contemporary culture.

Game Over, "Avatar" Dude by Marc Merlin is licensed under a Creative Commons Attribution-Noncommercial-No Derivative Works 3.0 United States License.
Based on a work at thoughtsarise.blogspot.com.
Posted by Marc Merlin at 8:40 PM

I am not sure that Cameron had ``video game'' in mind when he crafted his movie, though certainly his world is patterned around virtual worlds like Second Life, Cyberspace (Gibson), and the Multiverse (N. Stephenson). If one removes the remote-controlled Na'vi-human-hybrids from the picture, the story, as you and others have remarked, is similar to Dances with Wolves. So, remove the avatars and you've got a familiar story; add them, and you have a video game? I suspect the similarity to video games has more to do with the fact that these days action-adventure games have plots (and some even come with animated movies that players get to see glimpses of as they work through the story), albeit comic-book-like ones.

The critique of video games -- or rather, couchpotato-ism -- implied by your essay (in the paragraph starting with ``What is striking...'' and after) rings true. I certainly know several people whose passion for gaming has damaged their relationships by taking too much time away from friends, spouses, and family, while at the same time diminishing their social skills. In my case, I have another obsession that takes priority over games (though is perhaps just as damaging to my health): Although certain action-adventure and role-playing games ping the same pleasure centers of my brain as when I make a minor scientific discovery, after asking myself whether my time could be better spent producing a lasting contribution to mathematics, I come to my senses, and drop the controller.

Video games and virtual worlds can be healthful in certain ways, however. Many online games *do* allow players to communicate with one another by voice or by writing their thoughts, much like in an online chat room, thereby contributing positively to their social development. In fact, this is a large part of why some of these games, and even some of the early text-based MUDs, were and are so popular. Furthermore, they allow socializing to take place between people living long distances apart, that otherwise would never get the chance to meet. Imagine a geeky teenager growing up in some tiny little town somewhere in Kansas, bored and depressed. And then imagine what it must have been like for them to chat online for the first time, or to play a MUD game with someone just like them, but a thousand miles away, in another tiny little town. Now imagine what virtual worlds will be like in ten more years, and especially their potential to create communities.

Another way that video games and virtual worlds are healthful is that they exercise the mind in ways that reading a book, writing, or just socializing, do not. For example, some games require one to think strategically; others challenge ones analytical skills; and still others tax ones spatial abilities. I think the usefulness of these skills is underrated by our verbal-intensive society.

Finally, here are some links to a few reviews of Avatar that I have read on the internet, that give quite different perspectives: First is Harry Knowles at Aint-It-Cool-News.com. I usually trust his reviews, as I often agree with what he has to say. Next is Izabella Laba's review. It's the sort of thing I would expect her to write. You might also find the followup to her review amusing. Finally, here is Jason Rosenhouse's review. And, by the way, check out his review of the Krishenbaum-Mooney book Unscientific America (click on the links to the parts of his multi-part review).

Whatever Cameron was thinking when he fabricated the movie, there is no doubt it is one of a kind. It hooked people from across the globe and the majority does not care where the movie was actually patterned.